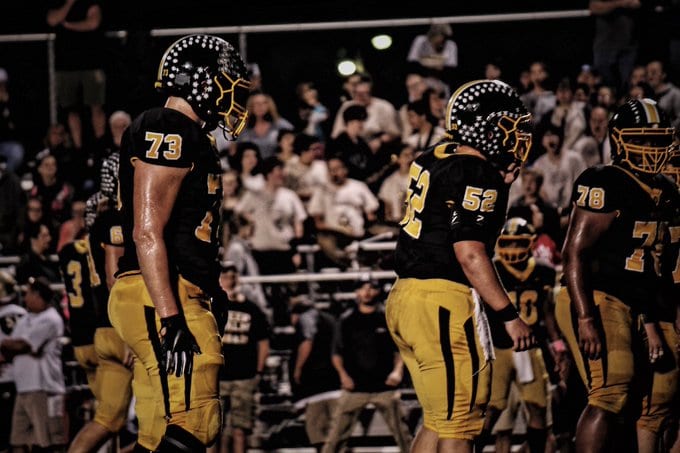 Murphy High School’s number 73 Yousef Mugharbil, one of the most sought after recruits in the nation, has narrowed his college favorites down to seven.

With the release of his top 7 choices, he also said that his recruitment is still 100 percent open and isnt close to making any decision.

Yousef Mugharbil is listed as a 6 foot five inch 315 pound offensive tackle. He is currently a 4 star recruit according to 24/7 sports and has offers from nearly 20 different division 1 colleges.

His junior season highlights can be found here.

Tune into FYN sports next week as we plan on speaking with Yousef over the weekend and hearing what he has to say about being one of the top recruits in the nation, and everything that he has gone through so far that has put him into this position.

With all NCAA sports being shut down for the rest of the school year and with all high school sports in North Georgia and the surrounding area being axed for the foreseeable future, what does that mean for college recruiting?

The two biggest issues for recruiting as of now are how the NCAA, NAIA and NJCAA handle the extra year of eligibility that the current spring semester college athletes will be given. The NCAA has announced that they will be giving this year of eligibility back to those athletes if they want it, but what has not been announced and what I don’t think anyone in the aforementioned establishments even knows, is how the scholarships are going to work. Extending scholarships to these athletes coming back could really cut into the scholarship dollars that current high school seniors and juniors might be expecting. I would think that the only logical thing that the NCAA could do is to say “if there are 4 seniors on your team we’ll give you 4 extra scholarships to offer,” and just give and exception to being over the scholarship limit for the upcoming year.

This scholarship exception would answer the first problem at hand, but perhaps an even bigger problem is how can spring high school athletes gain exposure when there are no games to produce anything that colleges can scout?

In high school, I think most would agree that junior year is the year that most young athletes flourish and pop up on college recruits radars. In the area that we live in and enjoy, I know first hand that most athletes have wanting to compete in a conference or state championship at the forefront of their mind over college recruiting, but with the spring semester of sports being taken away and with no chance at being able to do either of those, most are switching their focus to how this is going to impact them long term.

Speaking to some scouts from local schools and colleges the answer that most had for fringe highschool athletes without any offers or much exposure to recruits, was to put together an email that explains why you think you’d be a good fit at the school you’re interested in. Tell them in detail what you bring to the table athletically and academically, along with your transcripts and any tape that you might have that could set you apart from the rest of the other 8 million high school athletes in the US.

In this day and age with social media and the internet at everyone’s fingertips, good players always surface. If you have a high school athlete at home or you’re a kid reading this worried about what your future holds, maybe the best thing you can do is take a breath. Go get up some shots in your driveway and put in some work at home. We’re in a situation that nobody has ever been in before. It’s more of the unknown that worries a lot of people, so control the things that you can and stay in shape and get to emailing those coaches.