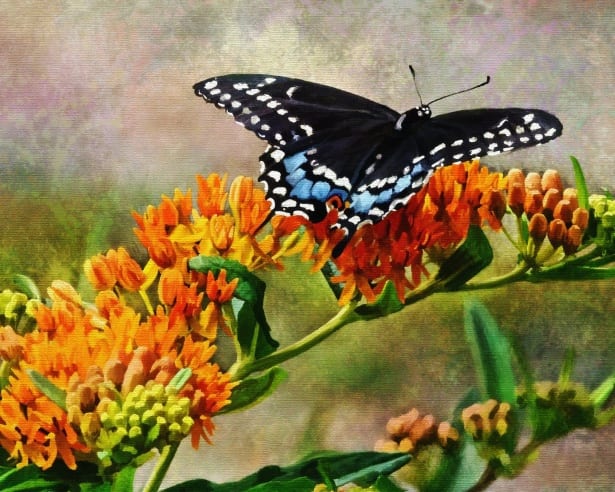 In the mountains, you don’t have to look very far to see the beauty of the land. Whether it’s fog rolling off the mountains or the sun shining off the water, the beauty is apparent. However, you really don’t have to lift your eyes to the horizon to see some brilliant colors. Oftentimes, the roadsides will have some great colors for you to see in wildflowers growing on the side of the road. My wife has yelped at me more than once for veering slightly off the road trying to get a better glimpse of something flowering. Let’s talk about some of those plants that often bloom along the roadside.

Joe-Pye weed is a perennial plant that grows to about 3-7 feet tall. It has leaves that come out in a whorl at each node. Usually there will be about five leaves in each whorl. It likes to grow in partial shade, so you’ll see it beneath trees. It puts on flowers starting in late July through September. The flowers range from pink to purple in groups of 4-7. The flowers are found at the top of the plant.

Jewelweed is a self-seeding annual. It also likes semi-shady areas. It is actually in the impatiens genus, which means it’s related to the impatiens that people like to plant around their house. They’ll grow 3-5 feet tall. The flowers are sac like with an orange-yellow color. In the early morning, they are covered with dew, which gives them a jewel like appearance when the sun glints off them.

Ironweed is a perennial that grows to be 3-10 feet tall. You can often find it in overgrown pastures. It blooms from August to September. It can look similar to Joe-Pye weed but the flowers are a darker purple. The leaves are also a darker green. 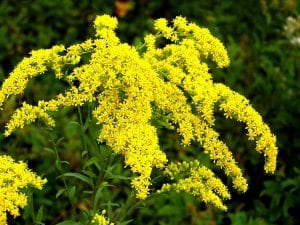 Goldenrod is a perennial that will grow to be 2-7 feet tall. We actually have several different species of goldenrod, but they all look very similar. The flowers are yellow and create a plume that lays over at the top of the plant. It blooms in August and September. This is another one that you’ll commonly see in old fields. Sometimes people confuse it with ragweed. Ragweed pollen can cause allergies, but goldenrod is not as much of an allergen.

Butterfly weed has brilliant orange flowers. This perennial is an important pollinator plant. It grows to be about 2 feet tall with clusters of flowers at the top. As part of the Asclepias genus, it is a native milkweed. Milkweeds play a pivotal role for monarch butterflies, because they will only lay their eggs on milkweeds. Monarch caterpillars only eat milkweeds. Butterfly weed needs full sun.

Sourwood trees have finished blooming for the year, but you can still see some of the leftover seed capsules, where blooms were. The flowers look like small white bells that hang in a line. Sourwoods are found from Pennsylvania to Florida, but southern Appalachia is where they are most common. Sourwoods leaves also turn to a deep red during the fall.

If you have questions about wildflowers contact your County Extension Office or email me at Jacob.Williams@uga.edu.