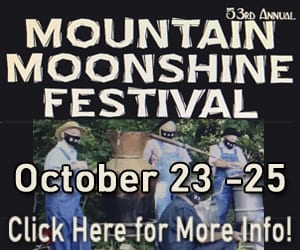 During the 4th weekend in October, KARE For Kids of Dawsonville, GA proudly presents
the 53rd Annual Mountain Moonshine Festival! They welcome over 100,000 visitors to
experience vintage race cars, revenuers, and more authentic moonshine-hauling cars than
you’ll ever see gathered in one place anywhere in the US! With a huge car show with judging
and awards, a parade, many great vendors, kids activities, two stages of entertainment, and great
food, there is something for everyone! 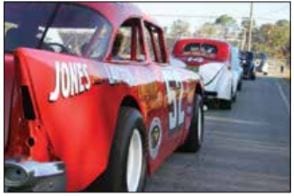 The weekend kicks off on Friday, Oct. 23 at 8 am with the start of the Car Show. At 10 am the
12th Annual Moonshine Run will be leaving from Bearden’s Funeral Home in Dawsonville to travel
the routes the moonshine runners raced through in years past, traveling to R.M. Rose Distillers in
Dillard, GA. Expect to be back in the City of Dawsonville by mid-afternoon just in time to
attend the Moonshine Festival activities. On Saturday, Oct. 24 at 9 am, a parade of vintage
race cars and moonshine era cars will present 2020 Grand Marshal David Ragan followed by
Opening Ceremonies and this year’s Moonshine Hall of Fame inductees will be announced.

Live music, arts and craft vendors, food, children’s activities, and exhibits continue through
Sunday evening, Oct. 25 at 5 pm. You can purchase Mountain Moonshine Festival souvenirs,
taste real moonshine at the Dawsonville Distillery and tour the GA Racing Hall of Fame.
This festival is a reunion of sort for many well-known race car drivers and owners, so you
never know who you may see milling around! The event is free; parking is $10 per car.
Shuttles will be running. Bring your entire family, your cameras, and be prepared to stay
all-day or weekend to see what Dawsonville and the North Georgia mountains have to offer.

For more information, 706-216-5273 or www.kareforkids.org. All proceeds go directly to helping children in need in Dawson County.
We Thank You & Are Most Grateful for Your Support!! 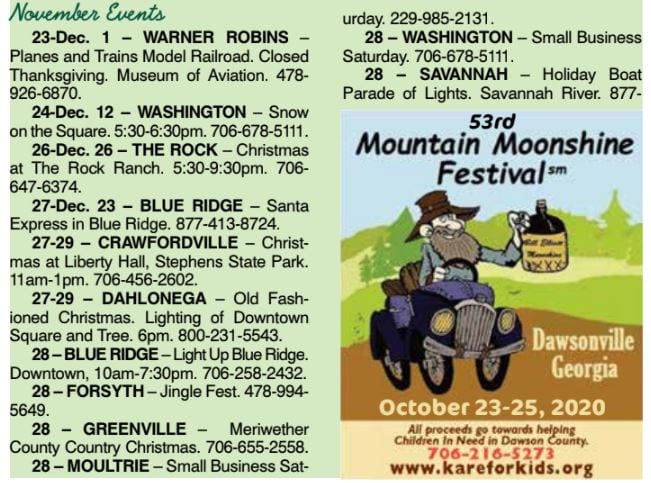 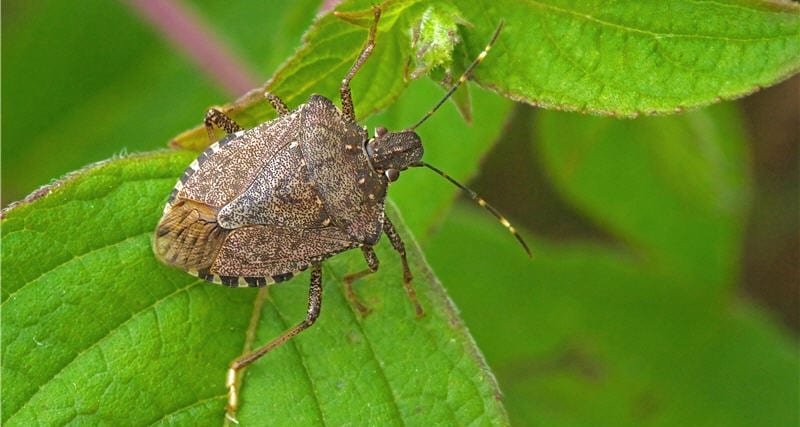 We are in that time of year when stinkbugs start to move indoors. They can be a real annoyance. Let’s talk about where these bugs came from and what you can do to keep them from becoming a big pest in your house.

The stinkbugs that are trying to get inside your house are most likely brown marmorated stinkbugs (BMSB), Halyomorpha halys. We have some other species of stinks bugs, like green stinkbugs, but these other species are not normally a pest inside the house. BMSB are brown as their name implies, but to really be able to tell them from other brown stinkbugs you have to look at their antennae. BMSB will have dark antennae with light bands on them. Part of the reason why these BMSB are such a pest is that they are an invasive species. They originally are from Asia, and first arrived to the US in Pennsylvania sometime before 1998.

One of the things that makes BMSB such a bad pest is that they aren’t only a pest in the home, but during the growing season they’re a pest to a lot of fruit and vegetable crops too. Stink bugs feeding on the fruit of plants causes that fruit to not develop properly. Apples and peaches will have ‘cat facing’ or sunken spots on them. Beans and okra will have deformed pods, and tomatoes will get spongy areas. Stink bug damage doesn’t always mean that the produce is inedible, but it does make it more difficult for the farmer to sell, because it doesn’t look as nice.

BMSB mate in the spring, so there is not a concern that they are reproducing in your house, even though it may seem like they’re multiplying. They don’t feed inside your home either. Their mouth is like a needle that sucks up juices, so they can’t eat building materials.

The first step to keeping them from becoming a pest inside your home is exclusion. Seal up cracks around windows, doors, pipes, and any other spots with a good caulk to block their entry. Insecticides around the exterior of the house will help temporarily, but may not be effective beyond a few days or a week.

Vacuuming BMSB is an efficient method, but it can cause your vacuum to stink temporarily. An alternative is to put some pantyhose over the vacuum tube secured with a rubber band. Stuff the pantyhose down the vacuum tube to keep the bugs from entering the vacuum bag. Once you’ve vacuumed up some BMSB drop them into some soapy water and they’ll drown.

Using an aerosol fogger may kill BMSB, but it won’t keep more from entering the house and emerging. Always use care when using pesticides. Make sure you follow the label entirely. Pesticides will only provide brief respite and can lead to more carpet beetles that feed on the dead stinkbugs and then feed on woolens or stored dry goods.

Some homemade traps are quite effective at trapping stinkbugs. One of them uses a foil roasting pan, filled with soapy water. Simply point a desk lamp at the pan, and stink bugs will find their way in there and not be able to get out.

If you have questions about stinkbugs contact your County Extension Office or send me an email at [email protected]. 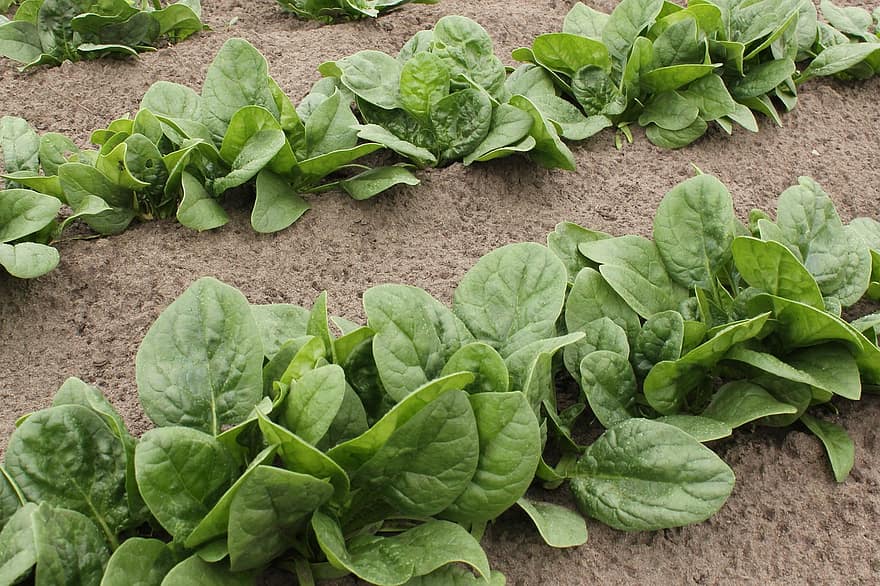 Do you usually have a fall garden? Now is the time to start thinking about one. There are some benefits to having a fall garden that we’ll get in to. Let’s talk about what vegetable crops and cover crops are an option for a fall garden and how to start your fall garden. 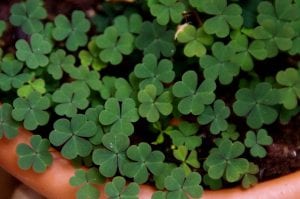 Clovers in a pot

Cover crops are planted in the fall and grow throughout the winter into early spring. Cover crops are beneficial to soil health and are often used in organic production. I like to think of the soil as a muscle in the body. If you work a muscle too hard or with only one exercise then you may injure the muscle by straining it or even tearing it. However, by diversifying your exercises and making sure that you’re eating properly for muscle growth you can grow stronger. Soil also requires development over time, and cover crops can help with that. Common crops are clovers and cereal crops like cereal rye, black oats, and wheat. Come springtime they can be tilled into the soil or laid down so that you can plant into them. Planting cover crops can help to develop organic matter in the soil, reduce erosion, suppress weeds, and conserve soil moisture. Around Labor Day is the ideal time to plant cover crops in our area.

Broccoli, cabbage, cauliflower, collards, kale, turnips, radishes, spinach, lettuce, beets, and onions are some good options for a fall garden. For fall gardens it is important to use mulch to protect the plants from the frost. You may need to get another soil test done on your garden to see if you need to add any fertilizer for the coming crop. Ideally, you want the plants to have 50 – 60 days to mature before the first frost. Our average first frost date is mid-October. That makes mid-August a good time to plant. 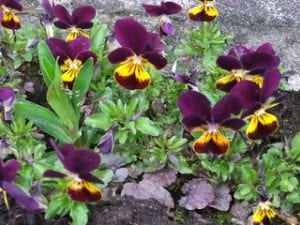 There are a couple of benefits to planting in the fall that you don’t see in the summer. One of these is there are fewer insect pests around. That means you won’t need to spray as many insecticides. If you are trying to grow your garden organically that is a very good thing! There will also be fewer diseases that you have to contend with in the fall. Diseases like hot, humid conditions. As the temperature drops in the coming months diseases will become less and less of a problem. Winter weeds can still be a problem but they are not as much of a pest as summertime weeds. Use mulch to suppress weeds.

Pansies and violas are an option for flowering plants that will last through the winter and keep their flowers. Plant pansies mid-September once the temperatures have cooled down.

Gardening in the spring means working through diseases and insects. In the fall the biggest challenge will be from the temperature. As the temperature drops rapidly selecting varieties of crops that can stand the cold will be important. It can be extremely rewarding to see green growing around your house after everything else has turned brown.