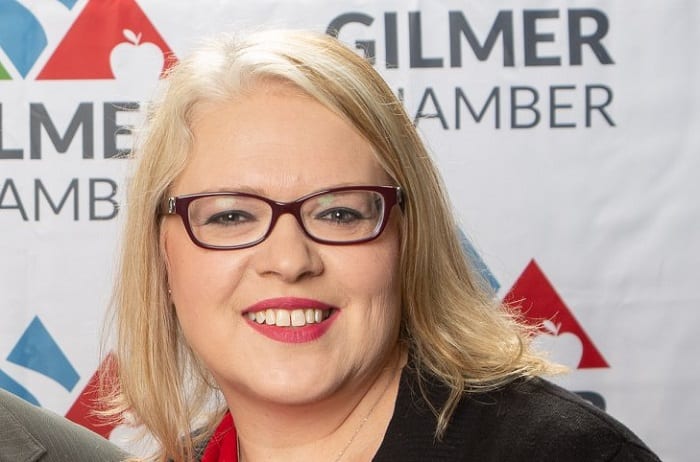 Inevitable. The decision to move home was coming sooner or later for Paige Green Hutto. The recently married President/CEO of Gilmer Chamber said she knew when she got married that she eventually wanted to move home to Alabama with her husband and family.

“Family” is more than just the husband and kids. It is parents, too. Hutto’s mother and father live in Alabama as well. Going home to that much was most definitely a major part of the decision. 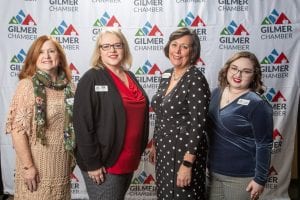 From Left to Right, Lisa Salman, Paige Hutto, Ellen Grant, and Caitlin Neal pose for a photo at the 2020 Annual Meeting of the Gilmer Chamber.

Yet, it wasn’t something that she has worried about and fretted over. It was a feeling that she was waiting for, a sense of “the right time.” She explains that she wasn’t looking for a sign. Instead, she knew that when the time came, she would feel it and understand in her heart that the time had come.

She wasn’t going to abandon her friends, Chamber members, and colleagues in such a rough time period with so much facing them amidst the uncertainties of the virus.

And so she worked through the time until a few weeks ago. Hutto said, “I just realized that it would be selfish of me to stay because I could not give 150 percent like I always had.”

With a divided heart between two towns and a divided schedule as well, Hutto said the community deserved better. It was a Friday that she finally decided. That Monday, she shared her decision.

She also stated that as she made her decision to go home, she was prepared that it wasn’t a quick change. She shared her decision and her resignation openly ready to stay on for the transition if the Chamber Board asked. 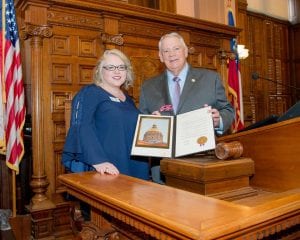 Paige Hutto, left, stands with Georgia House Speaker David Ralston, right. whom she worked alongside on many projects throughout her tenure with the Gilmer Chamber.

Hutto is still in Ellijay, for now. She is still leading the Chamber, for now. It is the last responsibility she is taking on as Gilmer’s Chamber President. Transitioning to a new leader, a new President.

The process, she estimates, should take about 90 days to find that replacement, with only a few days of overlap as she hands things off to the Chamber’s new leader.

Looking at the next chapter, there isn’t exactly a lit path ahead for her. She said going home and being with family is the main focus. As for continuing in the tourism business, she said it would take the right opportunity to come along to return to the industry. Gilmer is a special place and Hutto said she has loved it here.

“I’m really looking forward to finishing out my time in Ellijay. I’m really focused on that,” said Hutto.

To accomplish that, she is working through the issues of the day as the Chamber handles all of the details of the recently cancelled Apple Festival. However, a lot of work will also involve transferring her knowledge and the accumulation of the years. Getting the staff ready and the office ready for the coming adventures.