Blue Ridge, Ga. – Two officers with the Fannin County Sheriff’s Department were honored for their quick thinking that resulted in a life being saved.

A call came through dispatch of a single vehicle accident on Highway 2 near Flowers Baking Company. A silver Ford Focus driven by Michael Peppers of Blue Ridge had left the roadway and struck a tree.

Corporal Dustin Carter and Investigator Gary Edwards were first to respond to the scene and saw that the male driver was alone and trapped in the vehicle.

“The door panel was crushed from striking the tree,” Investigator Edwards spoke of the scene upon arrival.

The door was unable to be opened and both officers saw the condition of Peppers deteriorating.

“He was slightly responsive. He was losing color and as we were speaking to him, his condition worsened and he just went out, non-responsive, lost all of his color,” Edwards recounted the quickness in which Peppers’ condition worsened.

Accident reports from that day detail how Peppers’ skin color began to become grayish in hue as his eyes rolled back and his breathing came to almost a complete stop.

“He was on the verge of completely not breathing. He was having agonal respirations,” Fannin County EMA Director Robert Graham spoke of Carter and Edwards’ actions and explained that agonal respirations is a gasping for air that is associated with body reflex and is seen in medical emergencies.

Investigator Edwards and Corporal Carter worked together to free Peppers from the vehicle, Edwards having to break out the back window to gain access. It was at this point that Carter recognized the signs of a possible overdose and Edwards retrieved his supply of Narcan.

Narcan is a nasal spray used for the treatment of an opioid emergency or a possible opioid overdose with signs of breathing problems.

Upon returning, Edwards reported that Carter was able to free Peppers from the vehicle and had him laying down on the ground. Edwards administered the nasal Narcan and Peppers began to breathe and move again.

When paramedics arrived, both officers helped to load Peppers onto the stretcher and observed that he was talking to paramedics as they left the scene.

“Seeing his reactions. From the time we got there, he was kind of responsive to unresponsive in just a few minutes,” Carter explained the decision to use Narcan. Carter says that training and experience are how he was able to quickly recognize the signs of a possible overdose.

The officers were given pins of recognition by Fannin County’s Emergency Management Team to acknowledge that their quick thinking and actions were directly responsible for saving a life. 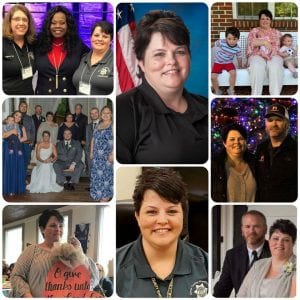 This week, we would like to introduce you to Civil Clerk Eva Estes. Eva has been employed with GCSO for 6.5 years. Eva started as a Communications Officer in our 911 Center and worked there over three years. For over three years since, she has worked as a Civil Clerk. Her smiling face will be the first one you see if you ever apply for a Concealed Carry Permit and need to be fingerprinted. She is also a certified TAC (Terminal Agency Coordinator), enters warrants and civil papers to be served, and she handles anything to do with GCIC (Georgia Crime Information Center) and NCIC (National Crime Information Center).

Eva is a 1987 graduate of Cherokee High School in Canton, Georgia. Her very first job was in food service where she worked at the Burger Chief.

Eva says her hobbies are “being a grandmother, spending time with my family, and doing small projects around the house.” She told us her favorite movie is “The Notebook,” her favorite food is Italian, and her favorite place to vacation is Hilton Head, South Carolina.

When asked what her favorite part of her job is here at GCSO, she said, “I enjoy being a part of the puzzle that ensures criminal history information is correct for the safety of officers and community.”

When asked what is something people don’t know about her, Eva says, “I used to play drums.”

Eva, your dedication to the important job you do doesn’t go unnoticed. GCSO and your community thanks you for the service you provide!