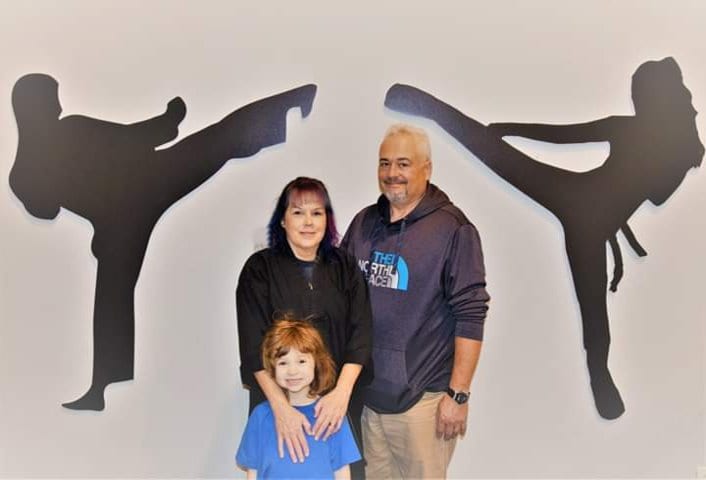 Learning to live with an autoimmune disease is a painful journey, but Elizabeth Doss uses faith in God and her martial arts training to push through it.

A small petite woman, whose hair today features blue high-lights, wearing a black gi, or karate uniform, tells a student to draw a card. . .a 10 of clubs. 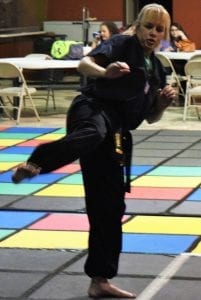 Elizabeth Doss is training for her fourth degree black belt at Christ Centered Martial Arts. She said martial arts helps manage the pain caused by AS and helps her mentally to face the challenges of living with an autoimmune disease.

“Clubs are push-ups. Do ten,” she orders as the class drops into a front-leaning rest position and begins pushing.

Doss, 58, believes learning should be fun and often brings the philosophy to the dojo, where she instructs students as part of Christ Centered Martial Arts. They have two dojos, one in Rocky Face and one in Chatsworth, at Holly Creek Baptist Church, where Doss teaches.

The third-degree black belt has a rare condition called Anklosying Spondilitis, an autoimmune disease that causes inflammation. According to the Mayo Clinic this can cause the small bones in the spine to fuse. This can lead to hunch-forward posture, if ribs are affected, it can be difficult to breathe deeply. The inflammation can occur in other parts of the body and there is no cure, although treatments can lessen symptoms and possibly slow the progression.

and at night when no one can hear. There are many like me..it’s why awareness is so important,” she said.

April is Anklosying Spondilitis, or AS, Awareness month and Doss uses the month, and encourages her students to as well, to bring that awareness. Her students are invited to create AS themed posters to educate about the condition.

“I’m either in bad pain or horrible pain,” said Doss. “Invisible illnesses like AS need to be take seriously.” 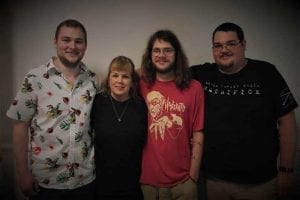 Doss’s back has started to fuse, preventing her from doing high-impact moves like jump kicks and sparring, but her expertise and experience teaching –she home schooled her three sons and now her granddaughter-allows her to explain exactly how to do the moves.

For Doss, the symptoms started when she was 22 and while she and husband, Stephen, were in Kentucky, where he was in seminary.

“The symptoms were similar to strep throat, but there were other symptoms,” she said.

The doctor at the school’s clinic treated her for strep, but she started breaking out in a rash and certain joints were swelling. It seemed she was allergic to the medication, but even when she stopped, the new symptoms persisted.

Another doctor suspected lupus, another autoimmune disease that affects different organs and creates a rash and started her on prednisone. The steroids did not help the symptoms but caused an allergy to steroids.

“I continued to get worse,” she said. “Finally, it was decided, since a doctor friend owed him a favor, that I’d be put in the hospital to be taken off the steroids and given multiple tests as a test subject.”

It was while she was in the hospital, undergoing tests, she discovered she had AS, a non-specific heart problem that causes her heart to not beat correctly, and a heart murmur that she already knew about.

“AS may start primarily in the back but it affects the entire body. I had almost all my organs infected and inflamed once due to AS. It was horrible,” she said adding her biggest concerns are heart issues, lung issues and eye issues that are part of AS.

“My parents insisted I come back to Georgia and see Dr. Leila Denmark,” she said.

Leila Denmark was a prominent physician who died at the age of 114. She retired from practice at age 103 and is credited with co-developing the pertussis, or whooping cough, vaccine.

“Dr. Denmark looked at my paperwork, then looked my mama straight in the eyes and told her I should be dead,” Doss said. “She

Doss’s students at Christ Centered Martial Arts go blue for April to show their support for their Sensei. April is Anklosying Spondilitis month. AS is an autoimmune disease that causes inflammation and vertebral fusion of the spinal column.

determined I had rheumatic fever, but was treated for strep, which broke down my immune system and set off the AS.”

Denmark put Doss on a special diet and iron shots.

“It took me over a year to feel semi-normal.”

She said the news didn’t have a huge impact on her life right away.

“I’d been used to the symptoms for a while, didn’t have children and was young,” she said.

Even though she was in a lot of pain most of the time, she continued to

ride her bike and do impact exercises.

She started karate in her late 30’s and went to a rheumatologist for rheumatoid arthritis. It was then she learned her back had started to fuse due to the AS.

She’s fortunate in one sense, her AS isn’t nearly as bad as doctors expect for her age due to not being overweight and staying active in karate. In fact, the doctor told her he saw worse cases in younger patients.

“The martial arts helps because keeps my back, even with scoliosis, from being worse because of the stretches and movement,” she said. “It helps my joints, ligaments, and muscles with the movement from being as bad as they would without it,” she said.

Just as important, though, is the mental and emotional benefits.

“It gives me an outlet and that’s as important as the physical benefits,” she said.

Still, she’s in constant pain, has “painsomnia” — she can’t sleep well, or much, due to the pain combined with extreme fatigue, and the back pain, nerve and tendon pain from the AS.

“The last time I got a good night’s sleep or really rested was so long ago that I don’t remember it,” she said. 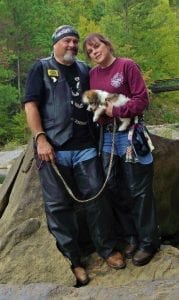 Stephen and Elizabeth Doss, along with dog, Justice, often take their motorcycle out.

AS is on the list for automatic disability for most states, but, unfortunately, Doss said she’d been out of work for too long to qualify, so she continues to work by tutoring children after school. During the day, she home schools her granddaughter, who along with her son and his wife, live with her and Stephen in Chatsworth.

“Chores still have to be done as well,” she said. “I’m totally exhausted by the time the day is out. I’ve been in pain all day and not slept well which only adds to the mental, emotional and spiritual fatigue,” she said.

The fatigue is horrible, she said. “It’s worse than having the flu–it’s a heaviness that weighs me down.” 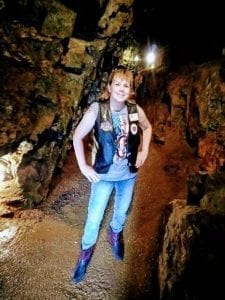 Elizabeth Doss says she tries to continue doing things she loves and relies heavily on her faith in God to get her through.

It’s not just martial arts that helps her through the tough and trying moments. Her relationship with God is instrumental to every moment of her life.

“I’m awake a lot, so I talk to God a lot,” she said. “I din’t know how anyone can get through the pain without faith.”

She used to take medication, but once it was no longer in the budget, she quit. Her faith became the salve. Because she doesn’t have insurance, she prays. She pays a lot of attention to illnesses are going around and encourages adults and children at the dojo to stay home if they aren’t feeling well.

“If you get the flu, stomach virus,or strep throat, you’ll probably be better in a few days …it will take me weeks or even months to be well,” she said, adding that the illness can go to her heart, which would kill her. “I couldn’t do it without faith.”

She said some Sundays are literally a day of rest and she doesn’t feel guilty about it because she knows God understands.

“When I’m really bad, I have friends and family praying and that comforts me as well,” she said.

“Without God, I’d never get through the day,” she said. “He gives me the strength in all areas to do what I need to do.”

April is also Arab-American Heritage Month, to learn about one woman’s experience, read here. To see what other causes claim April, read our story No foolin’, April has alot of awareness.