(An “Are You Aware” Fetching Feature)

Arab-American Heritage month is April and we are spotlighting Summer Hamed-Brewster of Chatsworth, who spent most of her childhood in Libya

CHATSWORTH–For Summer Hamed-Brewster, coming to America at age 21 from Libya in October 2001, weeks after the World Trade Centers were brought down by terrorists on September 11, was an eye-opening experience. April is Arab-American Heritage month and Hamed-Brewster opened up about her life in America while her family remains in Tripoli. 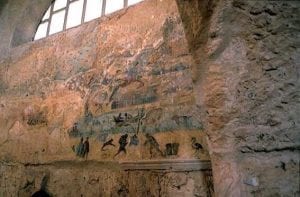 Summer Hamed-Brewster returned to Tripoli, Libya in 2005 to visit her brother, mother, and see her homeland.

“I don’t look Arab, and English is my native tongue. That’s the only reason my father let me come then,” said Hamed-Brewster, who has medium brown hair and fair skin. She was born in Houston, Texas to a Middle Eastern father and American mother. She moved to Tripoli in 1990, when she was 10 and considers herself Arab-American. “It was quite an adventure, I came by myself.” 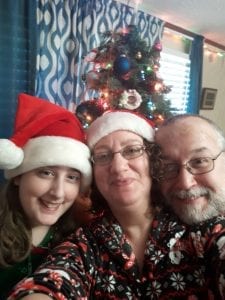 Summer Hamed-Brewster, center, daughter, Gail, and husband, Charles get festive for Christmas. Summer is Arab-American and plans to observe Ramadan at the end of April.

She had one suitcase of gifts for her mother’s family and some for herself when she went to Houston to stay with her cousin and other family members.

“It was an adventure and culture shock,” she recalled. “I was handed a lot of freedom and it was uncomfortable.”

It was uncomfortable, but she’d already made up her mind she was here to stay.

“My family didn’t know that and I wasn’t going to chance it,” she said. “I was 21 and figured I was an adult and could make up my own mind.”

Prior to coming to America, she said her father handled just about everything, although she worked.

“I did do occasional shopping, but mostly my father handled it,” she said.

One thing that shocked her the most was how friendly American’s were and how they dressed.

“I’m not saying Arabs aren’t friendly, but they don’t come up and talk to people they don’t know,” she said. 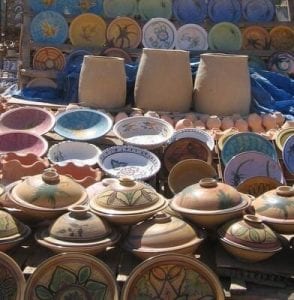 Pottery in the “Old City.”

Hamed-Brewster said she met her husband, Charles Brewster Jr., in an on-line chat room when she lived in Tripoli.

“I worked in the airlines and I went into the room to blow off some steam,” she recalled.

The two talked for about six months and when Brewster found out she was coming to America, he invited her to Chatsworth, Georgia. She went to meet him about a month into America and they married soon after.

“He’s never met my mother,” she said. “But he met my sister at our wedding.”

She said she’s also been to California to see her sister, Nadia Maddox, and they talk everyday. However, her remaining family in Tripoli have never met her husband or daughter, Gail.

Because the internet is so expensive there — charges are incurred by the minute, she hasn’t talked to her mother in years.

“I occasionally get to talk to my brother,” she said. He drives a taxi and in some places, the internet is free, allowing him to call her. 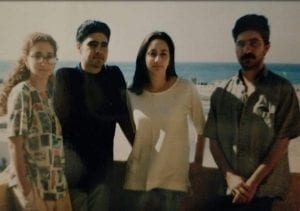 Most of her immediate family remains in Tripoli. Her sister, Nadia Maddox lives in California. Her brother Kamal Hamed and mother, Sydney Hamed live in Tripoli. Her father Mohamed Hamed and brother Haroun Hamed are deceased. It’s those moments that are the hardest, she said. Losing a family member and not being able to be there.

Although Charles and Gail love and support her, it’s still a difficult situation.

“When one dies, I don’t have any other family. They (Charles and Gail) have never met my family, so it’s hard to have that connection with them than with someone who knew them (the deceased family member).” 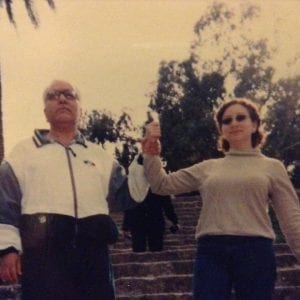 Summer Hamed-Brewster and her father, Mohamed.

After 9/11, Hamed-Brewster said she didn’t tell anyone of her Arab-American heritage as emotions were too raw. Her husband knew and when she interviewed for jobs, potential employers would ask why she studied in Tripoli.

“It’s mellowed some now,” she said.

She says she tries to keep her sense of humor when she encounters prejudice.

“Some people have physically distanced themselves from me. It doesn’t rub off on anyone, I promise,” she said. 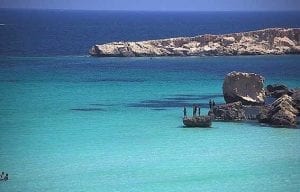 Summer Hamed-Brewster said she enjoys the beaches in Libya.

Interestingly, she said Libyans often treated her the same way when they found out she was half American.

The only time it does bother her is when it affects her daughter, who doesn’t consider herself Arab-American.

Hamed-Brewster said that she does talk about fasting and Gail has expressed interest in fasting with her during Ramadan, which starts on April 23 and lasts 30 days, ending at sundown on Saturday, May 23.

She also said she teaches her daughter some Arabic. “I don’t speak Arabic very well, but I’ll teach her a little.”

Hamed-Brewster said she is cautious about how much she teaches Gail, a 6th-grader because her daughter might say too much about it at school and her mother doesn’t want it to cause problems.

But, for the most part, people are okay with her heritage and are polite.

“It’s very complicated, very rich,” she said about the Arab heritage and when she returned in 2005, she made a point to visit. 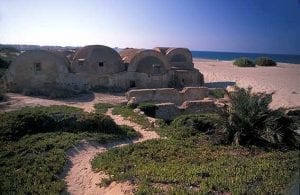 “I love the beaches and Roman Ruins there,” she said, adding she also loved The Old City, that has the more traditional wares which she enjoys looking at. “But, you have to be careful there because of pickpockets.”

While she doesn’t need a male escort, she said the Old City is one place where she wants one because of safety issues.

“It’s more secure to have one,” she said.

She said that while she was raised in a very traditional home where women did not drive — she still doesn’t– she has female friends who not only drive, but are in motorcycle clubs.

What she wants people to know

“We’re not all terrorist for one,” she said. “Most of us are just normal people and like normal things. Even the ones who wear head scarfs are normal people.”

She said Arabs, like everyone else, have families, tell jokes, get angry and live the best they can.