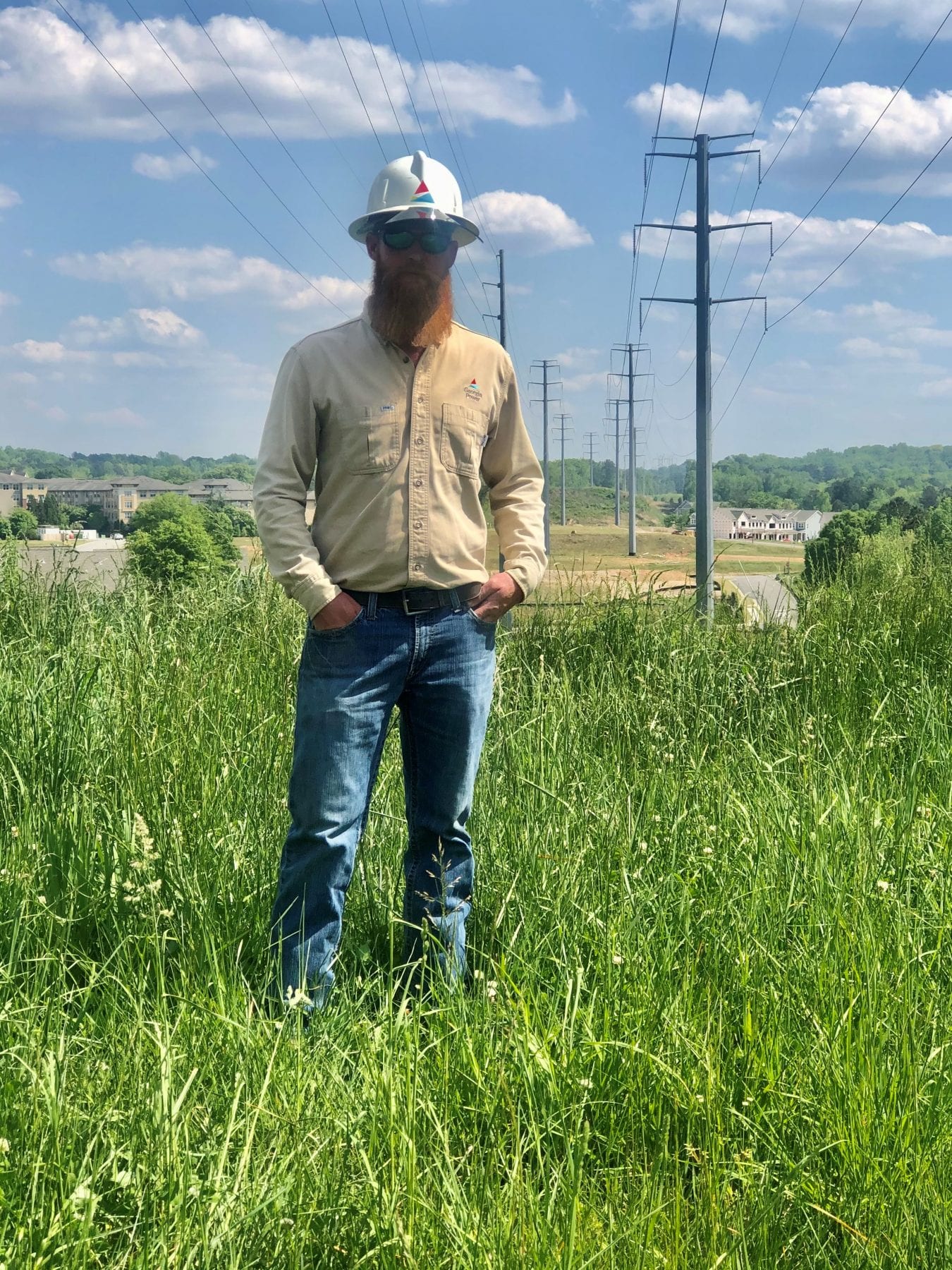 Company highlights crews during “Thank a Lineman” Month this April

Wednesday, April 20, 2021 – Growing up in a small town, Jeremey White knew he had an interest in working in the utility industry as a lineman and exploring new places.

Soon after graduating from Murphy High School in Cherokee County, North Carolina, White was accepted into Georgia Power’s Apprenticeship Program at its training facility near Atlanta. Over 42 months, White learned the ins and outs of safety, teamwork and restoring and maintaining utility lines.

“I knew from the beginning it was something that I was interested in and that interest just kept growing over time,” he said.

Once completing the apprenticeship program, he worked for Pike Electric Corp. as a contractor for the company, before joining full time at Georgia Power six years ago.

As a senior lineman in the Transmission Construction group out of Forest Park, White works with other crew members to set poles and upgrade lines across the city and metro area. He also has taken on a role as a mentor and leader to the new apprentices at the company who are going through the same program that he went through more than a decade ago.

“We have a lot of apprentices coming up and we have the opportunity to teach them and instill the importance of safety on the job,” he said. “In the process though, these younger guys are also teaching you. Every day on the job is truly a learning experience for all of us.”

In his nearly 14-year career as a lineman, White has had the opportunity to work on large transmission projects and travel to locations across the state to help restore power following large storms.

As a contractor, he went to Galveston, Texas following Hurricane Ike in 2008 and helped restore power to hundreds of thousands of individuals who lost power when the Category 2 storm made landfall.

While working for Georgia Power, he spent two weeks in South Georgia following the 2017 tornadoes in Albany and helped replace two transmission towers and get multiple lines of wire back up.

Closer to the metro area, he worked closely on the company’s “Hairpin Project” – including the rebuilding of an eight-mile transmission line between Plant McDonough in Smyrna and the Boulevard substation east of downtown Atlanta. Completed in 2019, the project was critical to Atlanta’s electrical system. Georgia Power’s crews replaced a total of 76 individual structures while maintaining existing electrical service in the area.

When not working his usual shifts in the city Monday through Thursday, White likes to head home to the mountains on the weekend. He is recently engaged and has purchased a home in Blue Ridge, where he enjoys being outdoors and spending time on the lake.

During the month of April, Georgia Power and other electric utilities in Georgia are celebrating and thanking utility workers across the state. The daily work done by line workers in Georgia’s communities is always recognized, but their work has been especially pronounced over the past year, as many families continue to work and learn at home due to the COVID-19 pandemic.

Utility crews and personnel respond to outages and essential work in all conditions and following severe weather, including the recent spring thunderstorms and tornadoes across the state.

Throughout Georgia Power’s 2021 Thank a Lineman initiative, saying “thank you” is quick and easy by signing the digital card at www.GeorgiaPower.com/ThankALineman.

Georgia Power is the largest electric subsidiary of Southern Company (NYSE: SO), America’s premier energy company. Value, Reliability, Customer Service and Stewardship are the cornerstones of the Company’s promise to 2.6 million customers in all but four of Georgia’s 159 counties. Committed to delivering clean, safe, reliable and affordable energy at rates below the national average, Georgia Power maintains a diverse, innovative generation mix that includes nuclear, coal and natural gas, as well as renewables such as solar, hydroelectric and wind. Georgia Power focuses on delivering world-class service to its customers every day and the Company is recognized by J.D. Power as an industry leader in customer satisfaction. For more information, visit www.GeorgiaPower.com and connect with the Company on Facebook (Facebook.com/GeorgiaPower [facebook.com]), Twitter (Twitter.com/GeorgiaPower [twitter.com]) and Instagram (Instagram.com/ga_power [instagram.com]).