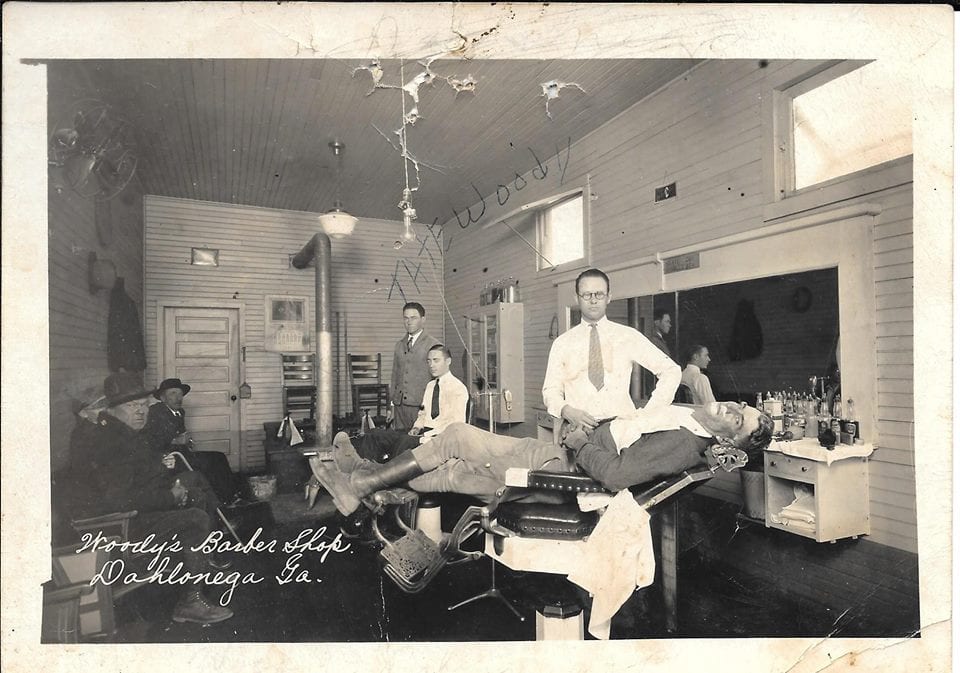 DAHLONEGA, Ga. – There is something nostalgic about an old barbershop.  They evoke wonderful memories of the past like a father taking his son for that first haircut. Or the soothing comfort of a hot lather shave or the scent of a Witch Hazel wafting through the air.

Woody’s Barber Shop in downtown Dahlonega is one of the state’s oldest barber shops. It was opened by Hunt Rogers Woody in 1926, during an era known as the “Roaring Twenties.” The Charleston was the latest dance craze, Calvin Coolidge was president and Lamartine Hardman was Georgia’s governor.

The little shop’s opening pre-dates the Great Depression by three years, the creation of the Tennessee Valley Authority by six years and formation of The Chattahoochee National Forest by about 10 years. In fact, it opened four years before Bonnie met Clyde and the lovers embarked on a murderous, multi-state crime spree.

Electricity was not available in most Lumpkin County homes and businesses when the shop opened and many of the 5,240-county residents (based on the 1920 census) lived in homes with dirt floors.

As the years passed, visiting a barbershop became a fraternal thing. The red and white barber pole signaled that this was an all-male bastion where men gathered, not just for a haircut, but to visit with their neighbors, have a smoke or a chew and talk about current events, politics, sports and, sometimes, women.

The moment the door swung open and you were greeted by the wonderful aroma of hair tonic, after shave lotion, neck powder and occasionally cherry or apple-flavored pipe smoke, you felt right at home.

Some remnants of the old shop remain today like the old green leather barber’s chair that sits in the back of the shop. No telling how long it’s been there.  Then, there are the chairs where customers wait for their haircut. They look like the old wooden chairs that came out of a 1950’s elementary school but are surprisingly comfortable.

But much has changed. A shave and haircut is no longer two bits like it was in 1926. Hot towel shaves, manicures and shoe shines are gone with the wind. 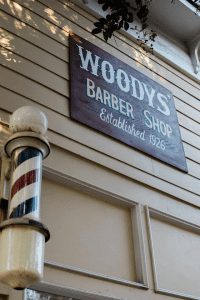 Most of the changes took place gradually.

For example, when Cathy Garner bought Woody’s from Alton Jarrard three years ago the sight of a female barber was not as much of a shock as you might think. After all, she had been cutting hair at the little shop on the town square for a quarter of a century. So, the sight of a woman cutting hair was nothing new to the regular customers.

“Some don’t care,” she said. “Some prefer it. Then there is always one stickler who will not have it because they don’t think a woman should be a barber. Most people don’t realize it but women were barbers way back in the day.”

In fact, Garner said the male barber is a dying breed. “Money is the main reason,” she said. “More people have started to realize they can make more money working at a salon these days because they offer more services than just a haircut.”

Cadets from nearby University of North Georgia make up a large portion of her business today. “We love them,” she said. “Our busiest day of the week is on Monday when they come back to school. They usually have to have a fresh haircut for their drills.”

Cadets fill the shop from opening until about 3 p.m. on Mondays. Or they did before the COVID-19 pandemic. Now only a limited number of customers are allowed inside at the same time. The rest, have to wait outside.

“They hit us hard on Monday.  If anyone else wants a haircut on that day, it’s best to come after 3 because they are all at drills. We’re slammed up until then.

Men still like to gather at the shop to talk and socialize. “They like to talk about the weather and their gardens. That’s the big thing. They talk about what’s not doing good in the garden.”

The Coronavirus is a hot topic lately. “Some people say it’s a hoax. Then you have others who are very concerned.”

There are two topics she won’t discuss – politics and religion. “Alton taught me that,” she said.

Fetch Your News is a hyper local news outlet that covers Dawson, Lumpkin, White, Fannin, Gilmer, Pickens, Union, Towns and Murray counties as well as Cherokee County in N.C. FYN attracts 300,000+ page views per month, 3.5 million impressions per month and approximately 15,000 viewers per week on FYNTV.com and up to 60,000 Facebook page reach. If you would like to follow up-to-date local events in any of those counties, please visit us at FetchYourNews.com