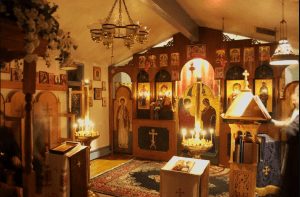 Candlelight offers ambiance to the sanctuary at the Monastery of Glorious Ascension.

Along U.S. Highway 41, along a stretch where it’s easy to speed past, is a simple sign reading Monastery of the Glorious Ascension. The winding drive to the monastery is tranquil and natural as it’s nestled in a wooded grove. Along the drive is a small cemetery, headstones standing in quiet reverence.

The Orthodox Christian Church has been in Rescuer since 1978.

Currently the Monastery of the Glorious Ascension houses the nuns, primarily Mother Tamara, but up until ten years go, monks lived there. Now the monks live in the Monastery of Saint Dionysios the Areopagite in Saint James, New York. The Abbot, Archimandrite Maximos and Father Hierodeacon Vasilios live in New York but often visit the monastery. Maximos and Vasilios converted, but Mother Tamara was born into the church.

All share a passion for their faith and made the decision to commit themselves only to serving God.

They are part of the Russian Orthodox Church. While many locals believe they are a small sect, the 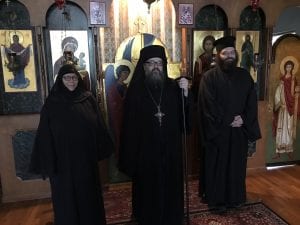 From left: Mother Tamara, Archimandrite Maximos, and Father Hierodeacon Vasilios inside the church at the Monastery of Golden Ascension, located near Resaca.

Russian Orthodox Church has about 30 million members world wide. Worship at the church at the monastery can have up to 30 people. Churches in Chattanooga and Atlanta are larger.

Other orthodox churches can be larger with more extracurricular activities for parishioners and families, but at the Monastery of the Glorious Ascension, services are simple.

“Some people just want to come to church,” said Maximos.

Their theology is deeply rooted in history and their worship can be traced back through the book of Acts in the Bible.

“We’re very traditional,” said Vasilios. “We live in this time but we’re very connected to our past.” 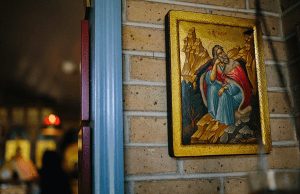 Because religion started in a world where most people could not read, the relics, like this picture, are full of symbolism to impart the message of Christianity in a way anyone could understand.

The tranquil setting of the monastery gives a glimpse into life there. Simple, but purposeful, appreciating God in every instance.

Services are held twice a day in a small church attached to the main building. Adorned in relics — pieces of art depicting Jesus, the disciples, and other saints hang on the walls.

High back chairs line the sides of the chapel. Some of their seats are folded up and in to offer a place of prayer. While the cross on the back of the seats is a common symbol, the backs, rounded at the top, offer new insight.

“It’s made to represent a coffin,” Maximos points out. Death, resurrection, rising.

In a depiction of the Christ, he is shown wearing a robe that is half red and half blue.

The symbolism is important, even now.

“These were created in a pre-literate society,” said Mother Tamara. “So, they used the symbolism to teach people. Even now, it’s used for those too young to read or unable.”

In addition to the relics, the church is divided, with the altar behind a curtain. It’s set up like the tabernacle in the Old Testament.

Easter is celebrated all week. Like many congregations, they have a sunrise service, with a twist.

“The service starts while it is still dark, so we sing and worship in complete darkness,” said Mother Tamara. Eventually, a lone candle is lit behind the curtain and the worship moves outside.

When they return inside, the message of Jesus rising from the grave is emphasized with the drawn back curtain and the doors to the inner sanctuary is opened, more candles provide light.

The small sanctuary does not have electricity. Although no electricity isn’t mandated, the candlelight gives the sanctuary an intimate warmth.

How do they support themselves?

The monastery must be self-sufficient so Mother Tamara, who lives there full-time, along with a “Novice”–a woman who is planning to ask for the blessing of becoming a nun, make homemade soaps and pure beeswax candles, which they sell at various Greek festivals and out of the monastics modest bookstore. 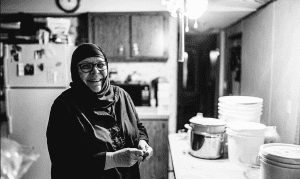 Mother Tamara makes all natural soaps to sell in order to support the monastery.

The candle house is a small building with a large pot of melted and heated wax. Stands of wicks are ready to be dipped into the wax and hung to set, leaving a coating of yellow-brown wax along the floor.

The soap is made in a mobile home located down from the main monastery. The tidy and neatly kept mobile home has a room filled with oils and other ingredients for the soaps, which are all natural. 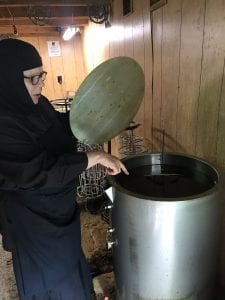 Mother Tamara checks on the melted beeswax used to make candles behind the monastery.

In the living room and dining area of the open floor plan are tables and shelves, holding more ingredients, molds and soaps that are setting.

“It takes six weeks for them to set,” explains Mother Tamara. “These aren’t melt and pour soaps.”

Once completed, they are wrapped and a sticker is attached with the type of soap it is. A small room in the trailer has all the soaps and body balms that are ready to go. Because of the pandemic, most of the festivals have been canceled, Mother Tamara said she hasn’t gotten caught up with wrapping the soaps.

“People ask me what a typical day looks like,” she said. “I honestly don’t know. I pray and do what God’s leads me to.”

According to their website, the evening service, Great Vespers is 7 p.m. on Saturdays . Matins at 9 a.m. and Liturgy is 1o a.m. on Sunday. Services are open to the public.

TRENDING NOW: See when the cannery is open here.