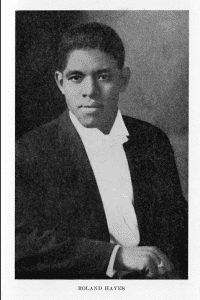 Tucked away on U.S. Hwy. 41 in downtown Calhoun and splashed in different parts of the county, one can find the name “Roland Hayes.”

Roland Hayes, in his time, was they highest paid black singer in the world and was born on the outskirts of Calhoun, in a little dent in the road called Curryville.

Born on June 3, 1887 to former slaves, William and Fannie Hayes who were tenant farmers on the plantation where Fannie had been a slave. Fannie founded Mt. Zion Baptist Church in Curryville, where Hayes first heard African-American spirituals, an oral tradition teaching the values of Christianity and the hardships of slavery.

Hayes’s daughter, Afrika Hayes Lambe, recalled in an interview at the Schiller Institute, that singing was not her grandmother’s first choice for her son.

“My grandmother was a very strict, very religious person, who did not believe that my father should pursue a concert career because she thought the the field of entertainment. . .was only for lightweight people.”

Instead, Fannie wanted Hayes to become a minister.

“But once he set his mind on what he was going to do, there was no turning back,” said Lambe, who added that it was his mother’s expectation of “impeccable dictation” that helped Hayes become a better singer. She would insist that he not tell her what he was singing, she should be able to understand it. Lambe went on to become a well-known soprano and music teacher.

It was advice that Lambe said her father carried with him.

“(He) used to tell me, ‘You can’t sing with a mouth full of tone. You’ve got to have some words.”

Hayes, despite breaking racial barriers, did face difficulties as a performer because of his color. In 1927, he gave a concert in Berlin, Germany but prior to the performance, a newspaper circulated questioning “how can this black man from the cottonfields of Georgia be expected to sing our wonderful lieder? He will do nothing but desecrate them; he’ll make a mockery of them.”

But Hayes would not be deterred. Despite being greeted with boos and hisses, and being frightened, he signaled his accompanist to change the order of the program. 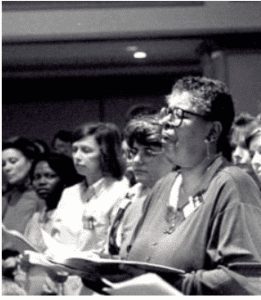 “Du bist die Ruh,” became his opening and was one of the favorites of the German people.

“He sang it so beautifully, they stopped hissing and started listening,” said Lambe.

By the end of the song, the audience was on their feet, pounding their walking sticks, not in anger, but in favor of the singer.

Hayes went on to perform all over the world, in multiple languages.

Lambe herself, witnessed the discrimination. She was 10-years-old in 1942 when her mother took her to a shoe store in Rome. Because they sat in the whites-only section of the store.  Some accounts state they were told to sit there. They were thrown out and when Hayes protested, both he and his wife were arrested and he was beaten by police.  Other accounts said that Hayes and the owner resolved the issue peaceably but Hayes was apprehended when he left. The incident made the news across the country and was even referred to in the poem by Langston Hughes, called “How About it, Dixie”.

It was shortly after this that Hayes moved his family to Boston.

He also faced criticism from anti-Jim Crow activist for performing in both integrated and segregated theaters.

Still, his 1945 show concert at Black Mountain College in North Carolina featured integrated seating and is considered “one of hte great moments in Black Mountain history.”

It was after this, the college had its first full-time black student and full-time faculty member.

In addition to the museum in Calhoun, located in the Harris Arts Center, plagues mark the grounds of Calhoun High School, his home at 58 Allerton Street in Brooklin, Massachusetts.

The Roland Hayes School of Music for students 9-12 grade is in Roxbury, Massachusets, the musical “Breath and Imagination” by Daniel Beaty is based on his life and the University of Tennessee at Chattanooga features the Roland W. Hayes Concert Hall.

The Musical Legacy of Roland Hayes by PBS