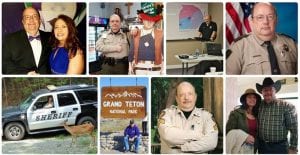 This week, we would like to introduce you to Deputy Kenny Wiggins. As one of our longest employed, Kenny has been working for GCSO for the last 25 years! During that time, he has worked as a Detention Officer, Patrol Deputy, Patrol Sergeant, and Patrol Lieutenant (Watch Commander), and his most recent position as School Resource Officer at Mountain View Elementary.

Kenny is a 1978 graduate of Gilmer High School. After graduating, he honorably served in the United States Navy from 1979-1993. His very first job was working at Gilmer Park & Rec in the early 70’s helping the maintenance crew with the upkeep of the ball fields.

Between the Navy and beginning at GCSO, Kenny worked two years from 1991-1993 on the base as Master at Arms Force of Fleet Combat Training Center (FCTCL), Atlantic as a Patrol Officer. He then worked one year as a Jail Officer with the Fannin County Sheriff’s Office from 1993-1994.

Kenny lists his hobbies as trout fishing, Nascar, and studying history, especially American history and the history of Native Americans of the Southeastern U.S. He says his favorite food is southern cuisine, particularly cornbread, pinto beans, fried potatoes, corn on the cob, fried okra for dinner then biscuits and gravy with eggs and bacon or sausage with a big cup of black coffee for breakfast! When asked his favorite movie, he says: “Anything by John Wayne but if I had to choose one of his it would be “In Harm’s Way.” He also said one of the best westerns ever made is “Shane.” He lists “anywhere in southern Appalachia and Yellowstone” as his favorite place to vacation.

When asked what is something most people wouldn’t know about him, he said he is a “very tenderhearted person when it comes to animals,” wishing it was feasible that he could take in all cats and dogs that need to be loved.

Kenny says his favorite part of his job here at GCSO is “the people I work with. There is no better group of people to work with than what Sheriff Nicholson has assembled here at GCSO.”