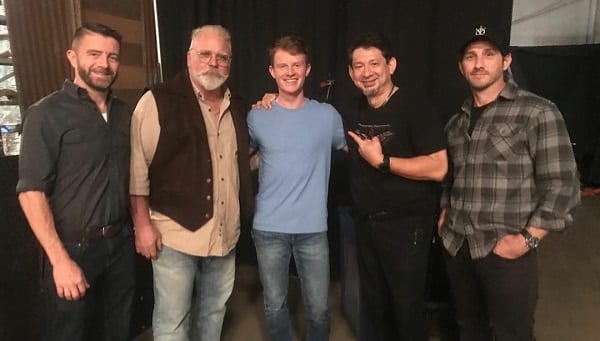 There are numerous sayings, quotes, and inspirations about talent and hard work. Reaching for something and driving hard to achieve that goal. Pursuit is a driving force that can turn any talented person into a master. A goal is the guiding star the directs that pursuit. And a goal achieved opens a whole new world of new goals, new paths, new pursuits. 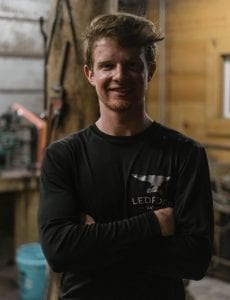 Caleb Ledford, a finalist in the History Channel show “Forged in Fire” and the forgemaster behind Ledford Works in Young Harris, Georgia.

A sword is a tool, a weapon. But for Towns County local Caleb Ledford, one sword has so much more meaning to it. The sword still sits in his shop, nearly seven months after the grueling 35-hour time limit he was given to build it.

Ledford built this specific sword in the finals of a popular History Channel show, Forged in Fire. The episode aired this week on April 22, 2020. But the competition actually was held at the end of September and into early October of 2019.

Ledford is 19-years-old now, but has been forging since he was 12-years-old when he grandfather, a carpenter, began introducing him to some of his work. Watching, learning, the young Caleb Ledford began seeing a spark of creativity. He saw something in his grandfather’s work that sparked inside of himself. It led to exploration, and it led to classes at the John C Campbell Folk School. At the school’s location in North Carolina, he took classes in blacksmithing. It wasn’t knife making which is the main focus that he has had over the last five years, but it was the first step.

As he learned from, and still seeks advice from, his grandfather on things, he brings that heritage forward as Ledford does everything from the metal work for his knives to the woodwork for handles and all the details in between including etching and carving.

Growing over those years, it was mentors, masters, and teachers like Liam Hoffman, who also competed in an earlier season of Forged in Fire and was, for a time, the youngest winner of the competition, and Don Carter, who was the first man to ever teach Ledford how to forge a blade, that honed his craft into a passion. And took his passion into something more. 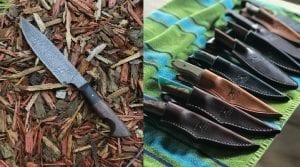 Just a few examples of the knives the Caleb Ledford and Ledford works have created a sold.

Ledford said on Forged in Fire that he was competing to “prove that as young as I am, I can actually make a name for myself and show everybody that a small-town-kid can do big things.”

It has been a short, meteoric rise for Ledford as he took seven years to go from a few classes in blacksmithing to specializing in bladesmithing for knives to expertise and selling them commercially to now appearing on a national tv competition show. The hard work it took to focus and build himself up in this skill was only possible, he says, because of his family’s support. That support was more than just encouragement and pushing him to grow, it was talking to people and meeting others, helping to open doors for their son to work harder.

Watching the show when he was younger, Ledford said he remembers thinking, “I want to do that one day.” 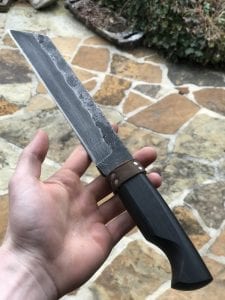 Caleb Ledford also performs custom work such as this Sax, according to his social media page.

The process took a little more than just wanting, though. Ledford actually met a few producers at a knife show but was too young to compete. However, they did encourage him to apply when he reached 18-years-old. Little did they know that he took that suggestion to heart and sent an email to them on the day of his eighteenth birthday. The application was accepted and Ledford went in for his turn.

Ledford separated himself in the very first leg of the competition by being the only one of the four competitors to pick a modern smithing style layering steel but using power tools to help as opposed to the other using mono-steel but hammering it by hand.

Despite a setback and mistake in round two with the hand and guards on the knife, the strength and sharpness proved tough enough to send him to the finals.

Though losing in the finals, the sword he built is still in his forge now. Ledford said he is looking for a place to hang it. The finals sent the forgemasters to their homes to recreate ancient China’s Sword of Goujian, one of the most intact artifacts ever uncovered by archeologists, according to the History Channel. 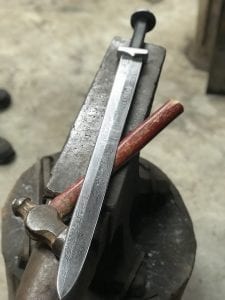 A modernized recreation of the Sword of Goujian, the project of the final round in Ledford’s competition on Forged in Fire.

Ledford said this blade is the largest blade he has ever made as he posted to social media saying, “It was truly the biggest thing I’ve ever made and probably the most difficult, especially with the time limit.”

He was given 35 hours to make a blade that he said he wanted at least 60 to 70 hours to feel comfortable making. Making knives all his career, Ledford said swords require more steps, more effort in a sword, from the length, maintaining thickness and balanced weight.

Achieving the finals, Ledford said he had the realization set in that he was accomplishing something. Win or lose, making the finals proved his standing with the best. He said, “I can actually compete in this thing, even though I’m a lot younger than everybody else who does it.”

Getting that kind of confirmation, Ledford said, wasn’t just to show others, but to show himself that he was worthy. It was confirmation of seven years of labor culminating to this point. A goal achieved, and a chance to find a new goal to strive for, a new star to guide.

Ledford chuckled slightly when asked if he would make more large swords saying, “I can promise you, it won’t be my last sword.” He still prefers his knives though and says he wants to continue focusing on them.

Not just making more swords, though, Ledford admitted later that if they had come to him as soon as he finished the competition and asked him to come back for another show later, he may have had doubts due to the toll it takes and the stress of the competition. However, with a few months off, he not only said he would accept, but said looking back, he actually enjoyed the competition aspect and what he did under that pressure.

“It’s the finished product,” said Ledford when asked what ignites his passion for knife making. He explained that each piece, in its final state, has meaning due to its utility. Taking a solid piece of metal and forming into something that is usable, that is the creativity and the artistry that drives him now. And each piece he makes, the final product pushes him to the next one, to do something different, or something better, or something new. 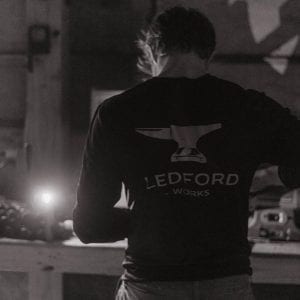 Caleb Ledford works at his forge in Towns County, Georgia under the business Ledford Works.

Most of Ledford’s knives that he makes are for sale, and even the ones he makes custom for his own use wind up getting sold. He says that he has a few he switches between, but it usually ends up that he shows it to someone and they want it. So, he ends up selling it to them. He doesn’t have a storefront, but Ledford Works does much of its sales online, through its Instagram, or by word of mouth.

Ledford said the hardest part of bladesmithing is grinding and bevels as matching on each side. From knives to swords, “It’s muscle memory,” he says.

While he says that the recreation of the Sword of Goujian is his favorite piece he has ever built, it may not hold that place for long as he admits he is constantly trying to outdo himself on each piece he builds. He is still taking classes in blacksmithing, studying welding, learning more and becoming more. Whether it remains a favorite piece or not, a sword has become a symbol. A sword that Ledford forged instead forged itself into a meaning of culmination,  a meaning of a goal accomplished and a driving symbol for whatever comes next from this master’s fire.

(All photos were provided by Caleb Ledford)