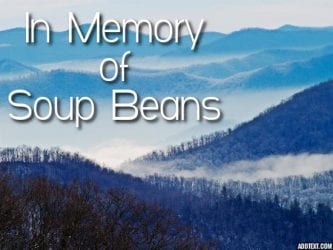 There are few rituals that I enjoy more on a cold, dreary day than the slow-living process of preparing a savory batch of soup beans. Not to be confused with bean soup, soup beans are a time-treasured staple in the history of Appalachian cuisine, capable of transporting a heart to a simpler era when life moved at a tempered pace, and gratitude was readily given for simple graces.

Like a magical concoction, soup beans never fail to stir my soul.

The ingredients are humble; a mess of dried pinto beans, a slice of fatback or a ham hock to serve as seasoning, and a chunk of onion will produce a succulent meal fit for a king at the price of a pauper. A thick slice of freshly-baked cornbread or a few, fried johnnycakes dipped inside a piping-hot bowl of the hearty fare completes the dish, conjuring a nostalgic essence of days gone by.

My love affair with soup beans began long ago with a deliberate decision to embrace minimalistic living. I often found myself yearning to lead an uncomplicated, yesteryear existence of “putting up and making do,” and that included altering my diet to follow suit.

Soup beans have become a time-honored tradition for many families in Southern Appalachia.

Raised by a Georgia-native who could whip up southern delicacies like the dickens, I was less than pleased as a choosy child when the primitive aroma of beans would waft through the house. It wasn’t until years later that I realized that the basic recipe was much more than what it surface-seemed. Soup beans symbolize an unassuming way of life that is gradually fading with the turn of generations, a past that I hold dear and aim to honor with each rich batch that I prepare.

While there are delicious variations available, my “hand-me-down” recipes are as follows…

Simple Appalachian Soup Beans:
Soak dried pinto beans overnight in a bowl of water. Drain and rinse. Cover with fresh water in a large pot, adding a ham hock or a slice of pork fatback, and diced onion to taste. Do not add salt as it may toughen the beans as they cook. Bring to a boil, reduce heat and cover, simmering for two hours or longer, adding additional water as needed. Season with salt and pepper (or perhaps a splash of hot sauce) as desired before serving. Top with raw, diced onion, and a side of fresh cornbread or johnnycakes to soak up the potlikker, more commonly known as broth to non-natives.

Southern Johnny Cakes:
Ingredients:
2 c. stone-ground cornmeal
4 Tbsp. unsalted butter
1 tsp. salt
1 c. whole milk
2 Tbsp. boiling water
Cream the cornmeal, buter and salt together. Add the milk with enough boiling water to make a moist, yet firm, batter. Drop by large spoonfuls onto a hot, greased griddle, flattening the batter with the back of a spoon. Fry until a golden brown, turning once to repeat.

Do you have a treasured tradition that you would like to see featured in a future article? If so, email [email protected]