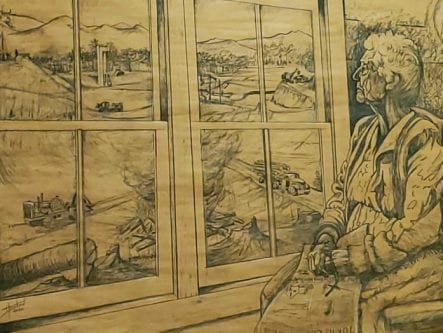 HIAWASSEE, Ga. – Marty Hayden relocated to Towns County from Pennsylvania a decade ago, and the gifted artist discovered a way to honor the history of a community that he has grown to love. Hiawassee is coined a “lake and mountain paradise” but the construction of Lake Chatuge – a manmade reservoir commissioned by the Tennessee Valley Authority in 1941 – left heartache and hardship in its wake. Approximately 3,500 acres of rich farmland and generational homesteads were eradicated by the lake’s arrival. Schools, churches, and businesses stood in the way of the project, and 532 gravesites were transferred to area cemeteries. 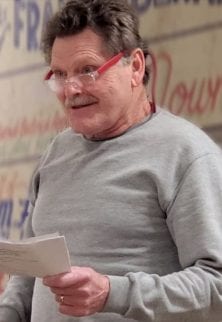 “The more that I dug into the history, I locked into this thing about Lake Chatuge,” Hayden said, explaining how conversations with the local community inspired the emotive, in-the-works art piece. “Working at the college, there was a lot of people that started coming up and telling me about their family history, and how they were just uprooted, and they had to move, and they only had so many months to get out…,” Hayden said. “So that really touched me. I said that must have been something.”

Hayden was employed as a night supervisor at Chic-fil-A on the Young Harris College campus for five years, prior to retiring last week. The artist explained that he conducted ample research for the sketch and that retirement will afford him the time to complete the re-creation.

“Luckily, online, I stumbled across several photographs. Some of them had to do with the Chatuge water tower, the intake tower. I got pictures of that. I got some of the pictures of the equipment, and then I started getting this vision that the best person to translate this to me was somebody’s mamaw,” Hayden said. “So if you can just imagine back in 1941, you’ve got about a 90-sum-year lady and she’s sitting in her cabin that she grew up with generations, and she’s staring out her window, and she’s watching everything disappear. Sitting in her lap she has the exact paper.”

While the nation was immersed in the news of World War II, the local population focused on the inevitable change that Lake Chatuge would surely bring. 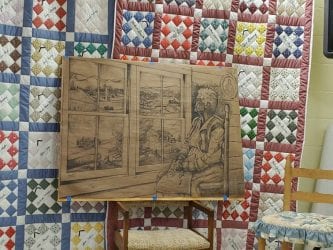 “This is just a sketch, and I did this over the weekend because I knew the (Towns County Historical Society) meeting was coming up,” Hayden explained. “But that’s going to be the size of the painting. The painting is going to be all the way in color, it’s going to be framed, and I’m going to donate it to the historical society.”

Hayden estimated the completion of the painting in late March. The gracious artist said that he plans to frame the original sketch and auction the artwork to benefit the Towns County Historical Society.