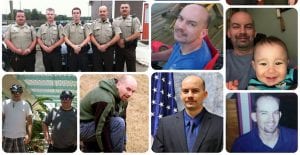 This week, we would like to introduce you to Detective Scott Camp. Scott has been working for GCSO for 16.5 years. During that time, he has worked as a Detention Officer, Patrol Deputy, and School Resource Officer. He has worked in the Criminal Investigations Division (CID) as a Detective and Evidence Custodian since 2012.

Scott lists his hobbies as fishing, camping, anything outdoors, gardening, any sports, video games, and playing games. He says his favorite food is steak and shrimp, favorite movies he likes is anything James Bond, and his favorite place to vacation is Casey Key, Florida.

When asked about his favorite part of his job at GCSO, he says he enjoys helping people, and that he especially likes recovering stolen property. 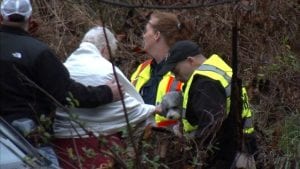 Detective Camp saves a puppy from a wrecked vehicle at the bottom of an embankment.

On the question to name one thing people might not know about him, Scott says he began losing his hair at the age of 17! As the post narrator, I’d also like to add that he once saved a puppy from a wrecked car that slid down the embankment next to the river!

GCSO thanks you for your outstanding service and the many years you have dedicated to the Sheriff’s Office and the citizens of Gilmer County!