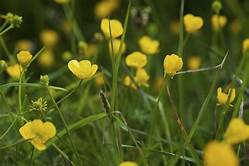 Buttercup is a longstanding problem for many pastures. Fields of yellow can be beautiful to look at when driving down the highway, but large populations of buttercup creates problems for livestock that are trying to forage. Let’s talk about these weeds and what can be done to control them in pastures and hayfields.

There are several different common names for buttercup. I’ve heard folks call it bittercup. It has a bitter taste that makes livestock not want to eat it. I’ve also heard it called bitter sneezeweed. That is a common name for a different plant that also has yellow flowers. The scientific name for buttercup is Ranunculus. There are actually different species of Ranunculus. Some of them are ornamental flowers that we like to see and grow. The plant that I am referring to has small yellow flowers that range in size from dime to quarter sized. The flowers have a glossy look to them. For most species of buttercup, you’ll see three leaves coming out of one spot. Each of those leaves will have three lobes on it. Generally, if you see those groups of three, that’s a good indicator that it’s buttercup. Some other plants like clover also have groups of three, but clover’s leaves don’t have lobes in groups of three on them.

Growing a healthy stand of grass that is able to outcompete weeds requires regular fertilizer applications, checking soil pH and adding lime as necessary, and managing the number of cattle grazing a field. Fields that are overgrazed will be more prone to weeds growing. Heavily grazed grass won’t be able to grow back as quickly because its energy storage down in the roots is depleted. If grass is growing healthily, it will be able to outcompete many weeds, buttercup included.

Mowing is another option for buttercup control. Buttercup is a short-lived perennial. If you mow before it flowers, you eliminate the seed production for that plant. This is a strategy that takes several years to become fully effective.

In some cases, forage stand management and mowing are not going to be enough and an herbicide must be used to effectively control buttercup. 2,4-D or an herbicide containing 2,4-D is the best option. Because buttercup is a perennial, a pre-emergent like Prowl, won’t be effective. For the 2,4-D to be effective the timing of the application is critical. If you see buttercup flowers, it’s too late. The 2,4-D application must be done when the buttercup plant is still small. Ideally, you want daytime temperatures to be 50 for two or three consecutive days. 2,4-D does have haying and grazing restrictions. Generally, you must wait 30 days before haying after spraying and wait 14 days before grazing lactating dairy animals. As always, follow the label.

If you have questions about buttercup, identification, or control contact your County Extension Office or email me at [email protected].