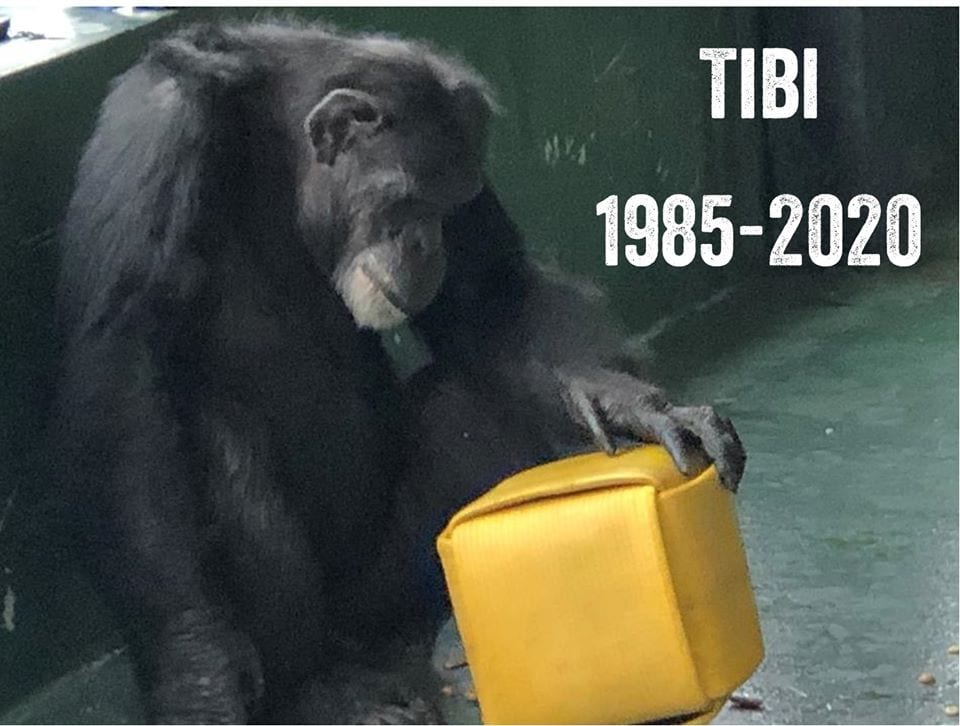 Blue Ridge, Ga. – One of the most difficult times in a rescuer’s journey is having to say goodbye to a beloved companion in their care. The staff and caregivers at Project Chimps are mourning the loss of one of their own, a 34 year old great ape named Tibi.

Tibi was born on December 30, 1985 and came to Project Chimps on November 20, 2019. He was one of ten male chimpanzees in a social group that includes Kirk, Armond, Justin, Neal, Rocko, Rusty, Luke, Greg, and Maverick that reside in Chimps Ahoy Villa.

The group was the most recent arrival to sanctuary, just six months ago. Every chimpanzee receives a full physical exam with diagnostic tests before they make the 14-hour journey to sanctuary. Tibi’s medical records showed that he was stable, his labs were within normal range for a chimp his age, and he was in good health for transfer.

We know little about the life Tibi had in the research labs beyond the history that he was born at the Laboratory for Experimental Medicine & Surgery in Primates and resided for a time at The Coulston Foundation before moving to the New Iberia Research Center and then ultimately enjoying his last days in the Blue Ridge mountains.

Tibi was acting normally and seemed healthy until he began to show signs of a critical illness this weekend. An emergency veterinary exam was performed, and his blood work revealed he was in renal failure.

Tibi was humanely euthanized surrounded by the care team who had already fallen in love with him. His fellow chimpanzees were given the opportunity to view his body and mourn his loss as well.

A necropsy was performed and gross findings are consistent with hemolytic crisis and renal failure, histology findings will be completed in two weeks.

While chimps can live into their 50s, according to the Lincoln Park Zoo ChimpDATA, the median life expectancy of a chimpanzee in captivity is 32.5 for males and 40.1 for females. Tibi was 34.

Tibi’s remains will be cremated and planted with a native/fruit tree on the grounds of Project Chimps in a future Remembrance Garden. The memorial site will be marked with a plaque with Tibi’s name.

Tibi was one of 80 former research chimpanzees that relocated to retirement at the Project Chimps sanctuary. Donations made in memory of Tibi are welcome.

“When Tibi first came to PC he was a bit hesitant to trust me but he eventually decided that I was ok.” said Caregiver Tawnya, “What I will remember the most about him was his Tibi “taps”. He would sit down and tap his feet on the ground to get the other chimps or care staff to play with him.”

Caregiver Aide Alyssa provided this tribute: “Tibi came to us as a fairly shy, reserved male. In the few months he lived in sanctuary, we saw a very different Tibi emerge. What he became was a gentle friend to all who knew him. Tibi understood that he was safe to break out of his shell and be himself. He would follow his friends around, tapping his feet and bumping his head into them to get their attention. He would play with any of the other males in his group, whether high ranking or low. Tibi was also highly innovative. He would let the other boys play with new enrichment, wait until they moved on, and then put some kind of new twist on the enrichment device that we as caregivers never saw coming. Tibi was nothing short a big surprise, a creative genius, and a friend to all in what was originally a small, shy chimp. He was loved by his family, whether chimp or human. Tibi will be missed immensely and never forgotten.”

Project Chimps lost Sopulu in May 2018 of acute cardiac arrest. You can read more about Sopulu by following the link.