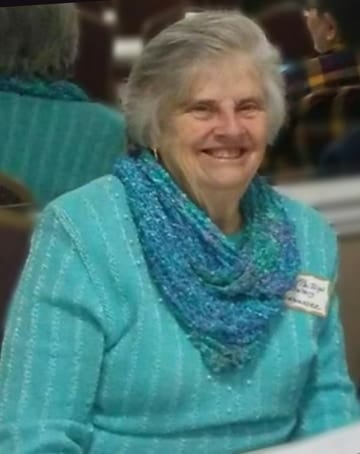 HIAWASSEE, Ga. – The Towns County Historical Society honored Betty Phillips and her late husband, Dr. Richard Allen Schmidtke, at its March meeting for their generous financial contributions toward the preservation of local history. 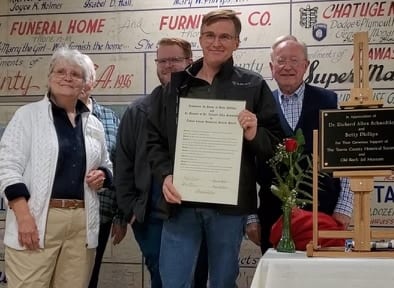 “And the resolution is; whereas Betty Phillips is a lifetime member of the Towns County Historical Society who has provided immeasurable support to our organization; and whereas Dr. Schmidtke held advanced degrees in mechanical engineering; and whereas he served his county with distinction in World War II, mainly as staff sergeant in the U.S. Army and the Manhatten Project as a 19-year-old who helped with the design of the ‘Fat Man’ Nagasaki bomb and other notable projects; and whereas he retired to the north Georgia mountains and adopted Towns County as his home; and whereas he married Towns County native Betty Phillips and became a life member of the Towns County Historical Society; and whereas by their anonymous generosity they supported the historical society and the Old rock jail Museum; and whereas Dr. Schmidtke passed away March the 27th, 2017. Therefore, we, the Executive Board of the Towns County Historical Society, honor Betty Phillips and the memory of Dr. Schmidtke on the anniversary of his passing by acknowledging the identity of our anonymous benefactors this 9th day of March 2020. Signed, Sandra Green, President; Jerry Taylor, Vice-President; Tyler Osborn, Secretary; Francis Shook, Treasurer; and Mary Ann Miller, Membership Secretary.” 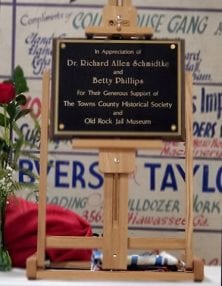 In addition to a framed resolution, a plaque was presented in honor of the benevolent couple.

“This plaque is in recognition of Betty’s many years as a member of the historical society and all the contributions, financial contributions, that she and Dr. Schmidtke have given over the years,” President Green said. “And as everyone knows, that knows Betty Phillips, they know how devoted she is to the cause of veterans. And so the plaque will be at the Old Rock Jail Museum in front of the veterans’ display room in honor of Dr. Schmidtke and Betty in honor of her love for the veterans.”

Phillips has graciously hosted an annual program for Towns County veterans each summer since 2014.

“I know she’ll appreciate that very much,” Kris Phillips said.